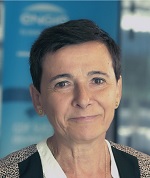 After studying mathematics and physics, Isabelle Moretti got a PhD in earth sciences at the Paris XI university in 1983 and was appointed as visitor scientist in Cornell Un. (Ithaca-USA) and MIT (Cambridge_USA). She joint the applied research institute IFPen where she developed concepts and softwares related to basin modeling. From 1986 to 2012 she intersects her years in R&D with years long stays in the O&G companies such TOTAL (Paris), YPFB (Santa Cruz-Bolivia) and Cepsa (Madrid). In the early 2000’s, she lead large European research projects aiming to understood earthquake nucleation. In 2012 she joined the group of ENGIE as expert. She became the technology director within the R&T coorp. of ENGIE in 2016 and then Chief Scientific Officer in 2018. She is so now in charge of the choice of the technologies related to the new energy mix (Renewable energy, biogas, solar, wind, H2, Energy efficiency, enabling technologies, IoT AI, smart grid…) and of the relationship with the academic research institutions. I. Moretti was elected GERG (Groupement Européen de Recherche sur le Gaz) president in 2017 and is also member of the board of various research organizations. She published more than 120 peer reviewed papers and is regularly teaching in France and abroad.